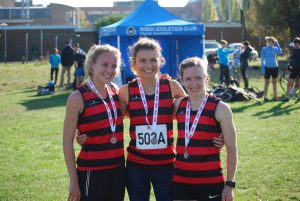 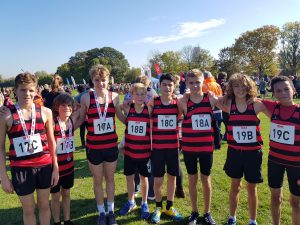 The Club enjoyed one of its most successful days, right through from the U13 age category to the seniors. For the first time our talented women’s squad secured medals on the regional stage, whilst our young athletes replicated their success of previous years.  It was heartening to see medals at U17 and U20 level, indicating a successful retention of talented athletes as they progress through the age groups.  This event has taken a while to establish itself on the calendar at the sharp end, but each year improves in overall quality and depth, and was warmer than ever this year.  Throughout the age groups the presence of top end runners (including in our own teams) should encourage others to take this event seriously in future years.

Our U13G’s squad had three complete teams, finishing 5th, 16th and 24th, whilst our U13B’s finished 2nd, 16th and 18th. James McDonald, as has so often been the case, must take the credit for the quality and depth of these squads, and our thoughts are very much with him in his ongoing battle with serious illness. They did you proud.

Johanna Nicholson finished 4th on a strong opening leg running 7.39, the 6th quickest leg of the day. There was consistent running from the two other team members, Annabella Bailey, 7.59, for 5th place, a position held by Rosalie Laban on the final leg, 8.14. Our C team in 16th were ahead of our B team in 24th, helped by a storming first leg run by Madison Ogilvie, 7.56, 8th position and 20th quickest time overall.

Our U13B’s team built on their outstanding third place at the National Road Relays, and went one better here with silver medals. The same three runners comprised the A team, and the same running order; why change a successful formulae? Zachary Crowther ran what is now becoming his customary strong opening leg, moving away from the field with 7.00. The new to running Fabien Whitelock had an excellent second leg dropping just one position to 2nd place, 7.16. Christo Chilton was nicely set up, albeit with a big gap to close to the lead team. He did his best and ran an excellent 6.55 to bring the team home in 2nd. As with the National Road Relays, Christo, 3rd and Zachary, 5th featured in the overall quickest times, and Fabien was just outside the top ten with 13th quickest.

In the U15 age groups we do not finish a girls’ team, but our boys produced one of the most exciting performance of the day. Jacob Harrison led off on leg one and ran a very strong race, pushing through to 2nd place by the finish, 6.37, which was to be the fifth fastest leg of the day. Joe Roberts took the team into first place with a good 6.52 leg, albeit there were fourth other teams in close proximity. This set the stage for an exciting last leg, and Ben Harrison produced his best run for some time for the Club. Running aggressively throughout, Ben and the Bracknell athlete pulled away from the other three teams in the closing stages in a true head to head. Ben’s 6.35 was equal second quickest of the day, but unfortunately for him and the team the fastest leg was produced by the last leg runner for the winning team. But it was great to see Ben running again at this level. The team has had to re-group with the absence of star performer Jaden, and this performance was the highlight so far this winter.

Our U17 and U20 women featured in the same race. The U17W event was particularly stacked, with three of the strongest teams in the country contesting the event. The other two, City of Norwich and Blackheath and Bromley, each fielded their strongest teams, indeed the Norwich U17s had won the National Road Relays at Sutton Park. It was therefore to the credit of the Herne Hill athletes that they were very much in the mix throughout the race. Yasmin Marghini and Phoebe Anderson, both coached by Wayne Vinton, were making their winter debut for the Club, and both produced outstanding performances. Yasmin ran with, and the pulled away from, the national steeplechase champion, Morgan Squibb, on the opening leg running 7.57, which was to be the fastest time of the day. Phoebe ran an excellent solo second leg, pulling away from the field with an 8.11 performance, an outstanding run on her own and fourth quickest overall. Both are great additions to our women’s section, and point to a very bright future indeed. Isobel Penniceard had the unenviable position of defending the lead against a sub 4.30 1500 runner, but held her nerve to finish 2nd, 8.42, holding off the fast finishing Norwich team.

Our U20W were also 2nd, building on an excellent opening leg from Katie Balme, 8.24 for 3rd, and her best run so far this winter. Two more of Wayne Vinton’s athletes, Annabel Hobday and Mollie O’Sullivan completed the U20 team. Annabel ran 9.12 to finish 4th on leg two, and Mollie had an excellent final leg to move the team up to 2nd. Her 8.15 was the 3rd fastest individual time of the day, whilst Katie’s run placed her 4th overall.

Our Senior Women produced an excellent second place, with two new athletes in the team versus the four who contested the National Road Relays, underlying our strength in depth. On this occasion it was great to see Katie Snowden back in the red and black, and demonstrating what a class act she is, even though she has only recently returned from an extended end of season break. Swann Phelippeau produced another strong opening leg for the Club, navigating her way through to 7th position with an 11.58 timing, 12th quickest overall. World 800 W35 champion Fiona De Mauny moved the team up two places to 5th with a 12.14 leg, running strongly throughout and handing over to Katie. The Commonwealth Games 1500m contestant embarked on a medal hunt on leg three, taking some strong runners to move the team up to 2nd position by the finish. Her 10.59 was the quickest SW of the day, 2 seconds faster than Pippa Woolven who brought home the winners with the second quickest time.

Our Senior Men produced solid team performances, finishing 9th and 14th, with our B team being the second B team overall, again showing decent depth. Mike Cummings was once again our star performer on what was a longer leg than in previous years (c4.7km). His 14.32 brought the team home in 4th place on leg one. M45 Simon Coombes underlined the high level he sustains well beyond what is conventionally regarded as an athlete’s ‘peak age’. Hard training and commitment have ensured Simon has maintained an incredibly high level, and rarely has a poor performance. On this occasion he produced a 15.21 leg for 10th place. Two more of our sub 4 minute 1500m runners from the summer, Andrew Warburton and Andrew Clarke, completed the final two legs, both finishing in 9th position with times of 15.14 and 15.27. The strong B team performance comprised Angus Butler, 15.52, Jack Dickenson, 15.42, Alex Hobley, 15.48 and Jack Brotchie, 16.10. To underline the day’s quality, Mohamud Aden produced an absolutely storming final leg for TVH and almost won the race for his team. His 13.26 was around 30 seconds quicker than last week’s Surrey League second placer, Nick Goolab.

We now look forward to the national incarnation of this event in two weeks at Mansfield, one of the true highlights of the winter calendar.