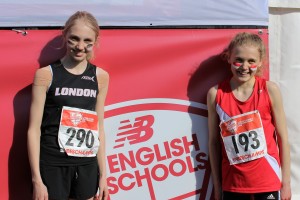 Harriers’ headline maker was again this week Alex Brown, who placed a close fifth in the Intermediate Girls race only 12 seconds behind the winner and 9 seconds shy of a podium position. Brown’s run was good enough to secure her selection for the England Schools team to compete at the Schools Home International in Falkirk on 19th March, a marvellous opportunity to wear the vest of her country. Brown led her London Schools team to bronze medals together with two of her Harriers club mates Katie Balme and Ella Newton, both of whom had excellent runs to place 34th and 35th respectively.

In the Junior Boys race Oscar Millard raced to a very fine top ten placing of his own as he finished ninth and was a key member of the winning Surrey Schools team who claimed gold medals in this age group.

Back at home on Sunday Herne Hill hosted the club’s annual Frank Harmer Memorial 10km road race in Brockwell Park on a sunny London morning. The home club provided the individual and team winners of both the men’s and women’s races.

The first eight ladies were all from Herne Hill, led by winner Julia Wedmore in 41.14 as Natasha Lodge (41.28), Jemma Day (41.30), Laura Dowsing (41.45) and Sue Swaine (41.56) all also ran times between 41 and 42 minutes. Sixth and seventh ladies Sara Roberts and Lisa Fowler were only a second apart in 42.32 and 42.33 respectively, with Nikki Sturzaker not far behind in 8th place (43.13). Impressive packing and the club thanks all competitors and volunteers who helped to make this another successful event.