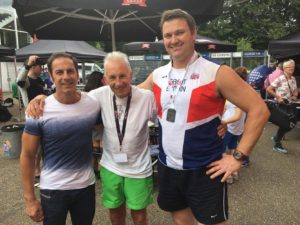 Into the second week of the European Masters Athletics Championship in Aarhus, Denmark and Herne Hill Harriers athletes claimed two more European medals. On Wednesday 2 August Stuart Thurgood won the silver medal in a closely fought battle between the second and third placed men in the M40 hammer throw.

Launching the 7.26kg implement a superb 51.58m in his fourth round of six throws, Thurgood prevailed for his silver medal with this throw being just 19cm further than the bronze medal winner. In his own words, he had to work hard for it but brought it home, with the gold medal winning athlete’s performance some 5m ahead being unassailable.

The following day Simon Coombes added another bronze medal to his M45 1500m third place run from the previous Sunday as he doubled his collection in finishing a good third again in the 5000m race in his age group.

Both athletes made their trip worthwhile, with Thurgood also placing eighth in the M40 throws pentathlon on Friday 4 August. Next year’s European Masters Indoor and World Masters Outdoor Track and Field Championships will both take place in Spain, Madrid in March and Malaga in September respectively, where a larger contingent from the club are very likely to compete against the best of their contemporaries at these events.