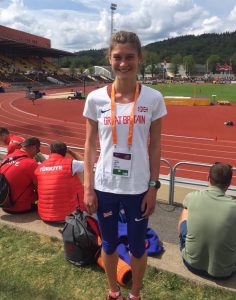 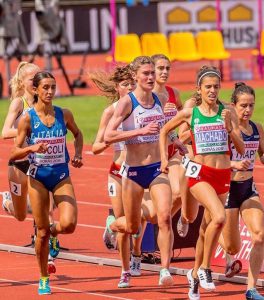 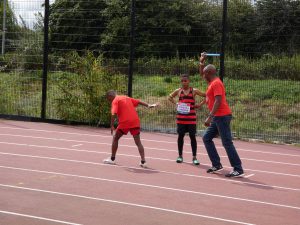 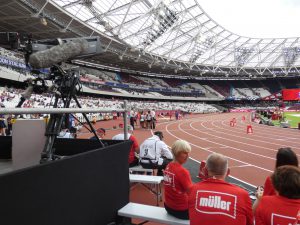 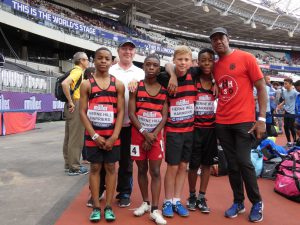 Saskia Millard was a superb fifth in the 3000m final in a time of 9.33.77 (9.27.12 in the heats) at the European U20 championships in Sweden. After finishing third in her heat Saskia ran for fifth, Saskia has returned this summer to track racing after a succession of career threatening injuries and to compete at this level and achieve such a result was a superb example of her determination and dedication in overcoming several years of injury and disappointment
Kristal Awuah competed in a world class 100m at the London Anniversary Games only a week after competing in the 200m at the European U23 championships. Kristal finished fast for seventh place in her heat in 11.37 which augers well for the second half of the summer.
Charlotte Alexander, English Schools champion set a new PB of 4.27.6 for 1500m in the BMC meeting at Eltham on Saturday evening becoming the fifth female athlete in the club to better 4.28 this summer.
Also at Eltham Mike Cummings ran a good season’s best 1500m of 3.54.71, Lewis Laylee got even more tantalisingly close to sub 4 with his PB 4.00.93 and Andrew Warburton ran a season’s best 4.05.40 in the same race as Laylee.
Also at Eltham Helena Corbin and Fiona de Mauny were also in the same 800m race, with Corbin this time finishing just ahead of De Mauny in 2.13.38 and 2.13.91.
Team wise it was a memorable week across the agegroups for the clubs teams, the veteran men and womens teams both learnt they had won their final matches in the Southern veterans league meaning they have won their divisions and qualify fo rthe Southern vets finals in Ashford in early September.
It is the first time in three years both teams have qualified for the final, whilst many of the clubs youngsters were in action at the London Stadium in the club connect 4 x 100m  relays which preceded the Anniversary Games.
Four of the Clubs teams qualified for these prestigous relays with the Under 17 women finishing third and the Under 13 boys fourth. All the teams enjoyed the thrill of competing in this iconic stadium and each team recorded season best time
Steve Bosley  – Herne Hill harriers
HEADLINES, NEWS
Categories
Latest Posts
Archives