This event showcased the sheer breadth of talent across the age groups within the Club, at a wet good underfoot course in Oxfordshire. On a day when long time member John Garber, was 6th M70, Jaden Kennedy won the U13B inter counties race, leading Surrey to a team gold.
The HHH M40 and M50 teams dominated proceedings, with a show of strength that would have sent ripples around the vets cross country scene. In the first race of the day Francis Marsh, who had within the last two weeks posted a 33.40s road 10km but had since had training interrupted by a cold, ran a well-judged race. Andrew Leach, a class young athlete in his day who has resumed a very successful running career over the last few years, ran away from the field, with Francis tracking the second placed runner before unleashing a strong last km for a clear second place overall. Francis led HHH to a team victory, with Gary Ironmonger, an 800m specialist, finishing 13th, and Keith Newton 18th. Gary won the gold medal for first M55, which ensured he left the venue with ample bling (2x gold), the true medallion man. He had out-blinged Francis, one gold and one silver. Mike Boyle provided excellent back up in 28th place followed by Tom Conlon, Andrew Simms and Glen Keegan. A team score of 33 points ensured a 17 point winning margin over second place London Heathside. This morning race also included the M60 team event where HHH also completed a scoring team placing 10th with Valdis Pauzers, Steve Knight and Nigel Goodwin closing out an HHH M60 team at the Southern Area Championships for the first time.
The M40 race promised to be a classic team battle, and race for individual medals. Howard Bristow, who had won the Masters Cross Country international, hit the early pace very hard. With two further class runners in the top three, Eliot Robinson and Sullivan Smith, there was speculation that he had hit the front a bit too hard. Ben Reynolds, multiple national and international medal winner and M50, was well to the fore. From early in the race there followed the very strong HHH trio of John Kettle, Simon Coombes and Ben Paviour, working as a group together up to 9 kilometres placed 6th, 7th and 8th almost from the gun, and an epic race battle ensued in the last kilometre between the three of them.
As the race unfolded it became very clear that this was going to be a another resounding HHH team victory. Spectators observed that there was ‘decent packing’ by the men in red and black hoops, indeed it was and if anything this was a bit of an under-statement with Robin Jones tracking the three in 25th followed by vets ‘debutant’ Ollie Morrison 32nd, Jon Key at 44th and Joffah Radcliffe in 59th place. Sullivan over-hauled Howard for an individual win, whilst Elliott dropped out, and M50 Ben Reynolds finished an outstanding 4th overall, running 10 seconds quicker than the winner of the M50 race. Club M40 3000m record holder (8mins 46s) Ben Paviour won the HHH battle, just overhauling Simon Coombes in the final field, 6th and 7th, and John Kettle closed the team in 9th. Such superb packing secured an emphatic team victory, 22 points to Oxford City’s 46. But to have 18 men competing and completing so successfully put many a club in awe of the HHH men’s veteran squad.
In the Senior Women’s inter counties race, Chloe Tighe once again showed her undoubted class, and unleashed a big kick in the final field to overhaul several runners. Chloe led Surrey to a team victory with her 4th place, just ahead of fellow group member, Steph McCall in 6th.
In the young athletes’ races, there were some very good performances from HHH athletes. Competition was strong, with most age groups witnessing top UK ranked athletes at the sharp end. Maisie Collis had an excellent run to finish 3rd in the U13G race, and was closely followed by Eva Holland in 5th place. The two of them led Surrey to a clear team victory. Also contributing to a team gold was Ella Newton, running for Kent. This race contained some class athletes, including Phoebe Barker (Kent) who had run the quickest leg at the National XC Relays, Mansfield, and the omnipresent Khahisa Mhlanga. A titanic battle ensued between these two outstanding athletes, which was only settled in the final field. Khahisa combines top end track running (41 sec 300 and 2.06 800) with cross country, and floats over the mud. With such speed, it was no surprise they she kicked away from Phoebe in the final 200m. The latter led Kent to an emphatic team victory. English Schools’ 3000m medallist Claudia Lance Jones (Surrey) was 3rd, just ahead of English Schools’ 1500 S/C gold medallist, Holly Page (Kent) in 4th. Holly was backed up by Dartford and Kent clubmate, Chloe Sharp, an English Schools’ 1500 champion (2015) and also a medallist this year, in 6th. Ella Newton closed the Kent team, finishing an excellent 11th place. Zoe Tompkins finished a very good 22nd place, just missing out on a team medal.
Herne Hill Harriers’ athletes featured in most of the other young athletes’ races, a great achievement to be representing their counties. These athletes (all Surrey) included Jacob and Ben Harrison (U13B), 16th and 26th, Jessica Tabraham (U15G) 97th, Oscar Millard (U15B), 25th, Laurie Pope, (U17M) 54th, Katie Balme (U17W) 19th, Tatianna Cooke (U17W) 46th and Jemima Hayward Bhikha (U17W) 79th.
Zoe Tompkins finished a very good 22nd place, just missing out on a team medal. Other Herne Hill Harriers’ athletes who represented their county (all Surrey) included Jacob and Ben Harrison (U13B), 16th, and 26th, Jessica Tabraham U15G, Oscar Millard U15B, 25th, Laurie Pope, U17M and Tatianna Cooke and Jemima Hayward Bhikha, U17W.
(Humble apologies if we have unintentionally missed someone out.)
Well done to all.
Keith Newton / Waldy Pauzers
11 December 2016 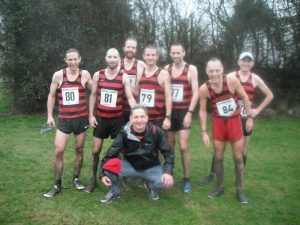