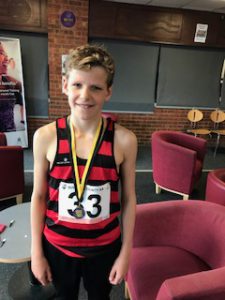 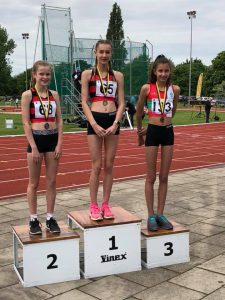 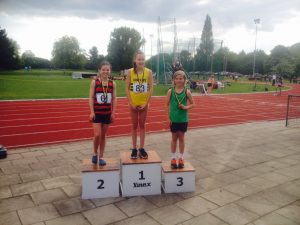 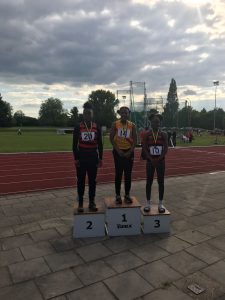 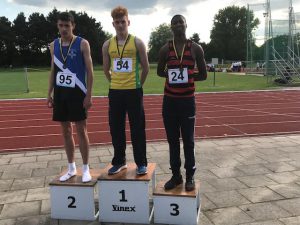 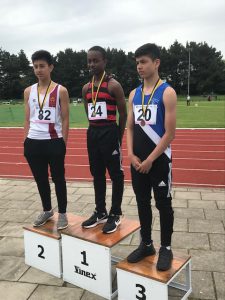 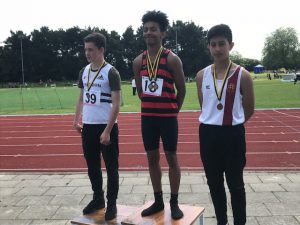 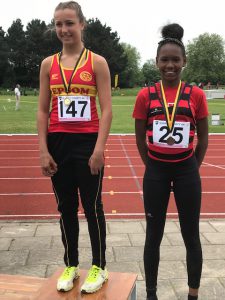 Herne Hill Harriers athletes enjoyed a very successful weekend at Kingsmeadow Stadium as they brought home a total medal haul of 45 from the Surrey county championships which saw a rainy Saturday and eventually a brighter, sunnier Sunday. Through the age groups Harriers runners, sprinters, throwers, jumpers and hurdlers won nineteen gold medals, twelve silver and fourteen bronze in the first championship event of the outdoor season. In addition Herne Hill members won two golds at the Middlesex county event to add to the overall club tally.

This year has so far been a strong one for 1500m runners from the club and two of the biggest winning margins over the weekend on the track came at this race distance. Both Christo Chilton and Maisie Collis dominated their finals from gun to tape, with Chliton finishing over fourteen seconds to the good with 4.35.49 in the under 13 boys race and Collis’ 4.41.78 seeing her finish almost twelve seconds ahead of the next under 15 girl, who is also a Herne Hill Harrier, Poppy Craig-McFeely with 4.53.16 for the silver medal.

Shot put was another rich source of medals with Tiarnan Matthews winning the U17 men’s title with 13.45m, Kai Broadbent the U15 boys with 12.24m, Britli Francis the U20 women’s with 11.32m and Je’Nae James the U15 girls with 11.91m. A superb collection of golds for athletes coached by a very happy Anthony Soalla-Bell.

Dejean Marshall-Brown won a bronze in the U20 men’s shot with his 12.84m, while in a different throws discipline, Mackenzie Laban placed second in the U17 men’s hammer with 43.47m. Alex Tischler threw a PB of 43.32m to win a silver medal in the U20 men’s javelin, Emily Callaghan was second in the U15 girls with 31.00m and Finn Crumley placed third in the U13 boys event with 24.72m.

Long jumpers Seb Wilson Dyer Gough (6.88m) and Ore Adamson (5.61m) won the senior men’s and U17 women’s events by clear margins, while further victories came from Ignatius Abebrese (5.71m) and Dante Clark (4.97m) in much closer contests in the U15 and U13 boys respectively. Farrah Martin was third in the U15 girls long jump with 4.89m. The only Herne Hill triple jump medal of the weekend came courtesy of Joyce Kalombo in the senior women’s contest with her 9.78m.

Alex Brown was one of the class acts of the weekend in the 800m races, as commanding her front running gun to tape victory in the U20 women’s race exuded quality and was rewarded with a PB of 2.11.60. Another excellent 800m performance came from Eva Holland who was second in the U15 girls race with 2.19.52. Mollie O’Sullivan finished second senior woman in 2.15.47, while Zachary Crowther took the U13 boys bronze medal in 2.23.37.

Another middle distance bronze medal was won by Benjamin Harrison thanks to his third place in the U15 boys 3000m with 9.38.44.

Elsewhere at the Lee Valley Athletics Centre two Herne Hill athletes won senior men’s county titles at the Middlesex Championships. Allandre Johnson threw a season’s best javelin of 57.22m and Tony Macdowall added to the 1500m collection win a win in 4.37.90 to complete an excellent all round weekend of county track and field action.