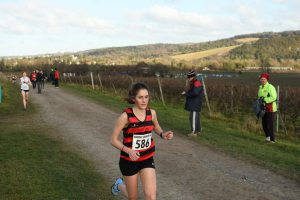 Herne Hill Harriers under 13 girls cross country team stormed to yet another emphatic victory, this week in the Surrey League Division 1 races on Wimbledon Common, while the senior women’s race saw new star Georgie Grgec finish a fabulous third in a strong field of 264 finishers as a follow up to her fine sixth place in the county championship in her debut race six days earlier.

After a strong showing at Denbies the previous weekend, the Herne Hill young athletes’ turnout was generally much lower in these league races, but this was not the case for the Surrey under 13 girls team champions from the club, who were again out in force to secure a clear win with the scoring four runners in the first eleven.

Last week’s Surrey individual winner Phoebe Bowen was this week a close second, again spearheading her team, who followed her in at close intervals, with Johanna Nicholson finishing sixth, Hebe Hunter just one second and one place behind her and Lois Levy eleventh. Further backup came in the form of Anabella Bailey who finished a good 17th position. The under 15 girls team placed third on the day in a strong field which saw Eva Holland finish sixth, Tilly Stevens-Cox 15th, Sophie Williams 24th and Jess Butland 46th.

In the senior races Harriers women’s team placed fifth and men sixth in their respective races for the second successive weekend, but the absence of some of the faster runners did not overshadow some excellent efforts from those who raced and one or two outstanding performances. There was none better than Georgie Grgec, who again led the women and again excited with another marvellous run that illustrates both her talent and her ability to race well. Her third place finish was in a field that was arguably stronger at the sharp end than the one in which she had placed sixth last Sunday and suggests she will be one to watch in the weeks and months to come.

Karen Ellison found the mainly flat, firm going at Wimbledon less to her liking than the hilly Denbies terrain, but ran well again to finish 22nd. Sarah Grover made her long awaited debut in the red and black colours to place 32nd, with Steph Mitchell finishing 47th with a sprained ankle as she prevailed in a close finish between three ladies for the two final berths in the scoring A team of five runners. Kate Crawford was just behind in 51st and only just ahead of Stacy Wheat in 53rd. Katie Kedward provided superb back up in 60th as part of the Herne Hill team who placed third among the B teams to emphasise a very good turnout.

The men’s Surrey League Division 1 cross country races were held at Coulsdon, where the Herne Hill sixth place team position was a disappointment, although the team retain fourth place in the overall standings after three of the four races as a result of a stronger showing in the first two fixtures before Christmas. The stand out run was undoubtedly Chris Busaileh who was clearly ahead of his team mates with a very fine 13th of more than 200 finishers.

Richard Henderson was one of the team front men as always and his 32nd position reflected the exceptional strength of the field for a local league race. Bryn Reynolds is now coming into form and his effort to finish 43rd certainly represented a top run. Andrew Clarke, Jeff Cunningham, Simon Coombes and Andrew Warburton placed 50th, 52nd, 56th and 64th respectively and the Herne Hill A team scoring 10 was closed by Mohammed Ismail 92nd, Carl Delaney 105th and Jack Brotchie 110th, all three of whom will reasonably expect to improve in the coming weeks.

Thanks to all who raced.