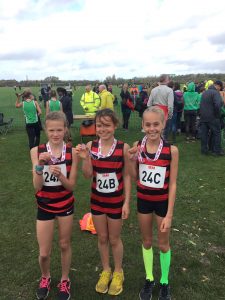 The South of England Cross Country Relay Championships were held as has become usual on the flat playing fields and woodland at Wormwood Scrubs in West London. Herne Hill Harriers young athletes have enjoyed success at these area championships and this year was no exception as teams from the club brought home silver medals in the under 20 women’s and under 15 girls events and bronze in the under 13 girls race as the female teams from the club had something of a field day.

The future looks very promising as Harriers were yet again among those clubs to be represented and indeed prominently placed in almost all of the age groups throughout the day. There were Herne Hill teams in eight of the ten races and in addition to the three medal winning performances there were fourth place finishes for both the senior men and women’s teams, as the latter were only a few seconds shy of joining their younger club mates in achieving podium places, while the under 13 boys, under 15 boys and under 17 women all placed fifth in their relays. Indeed fifth was the lowest position of any of the Harriers A teams in any of the age groups they actually contested on the day.

Herne Hill under 20 women were able to win medals for the first time as an excellent all round effort saw Zoe Tompkins hand over in seventh at the first changeover clocking 8.41, with Tatiana Cooke moving up to fourth on the second stage with 8.56 before Ella Newton’s split time of 8.30 saw the team move into the silver medal position and beat off a strong challenge from behind. These young ladies are now making a strong transition towards senior competition and are adding welcome strength to the club’s senior squad and proved in this race that they are competitive when able to compete in their own age category. Their times were ninth, tenth and thirteenth in the overall race standings in a display which was a model of consistency.

The under 15 girls race saw another battle for medals in which the team in red and black hoops placed second at the finish. In another consistent team effort in which all three team members were within fourteen seconds of each other, Isobel Penniceard set things up nicely in finishing fourth on the opening leg in 7.36, from which Maisie Collis then took off to run the fastest time on her stage and second quickest overall as her 7.22 took her team into second place. Eva Holland continued her good form and although unable to make any inroads on the leader – who turned in the fastest overall time – was able to hold firm and indeed gain a small amount of ground on her closest pursuer to bring the team home in second in 7.32. For good measure the Herne Hill B team placed tenth courtesy of Tilly Stevens Cox 7.54, Poppy Craig McFeely 7.46 and Jessica Tabraham 7.59 to demonstrate good squad depth.

A set of bronze medals was won by the under 13 girls team who were placed third at the end of each stage. Phobe Bowen handed over at the end of a stint which saw her run the sixth best time overall of 7.43, with Johanna Nicholson clocking 8.00 and Annabella Bailey anchoring her team in 7.55 for a richly deserved place on the rostrum.

The other female teams from the club, the senior and under 17 women placed fourth and fifth respectively. For the seniors Fiona de Mauny (12.25) handed over just outside a medal position at the end of first leg, followed by a very good run by Katie Kedward (12.59) returning to form and fitness on second leg to give Chloe Tighe (11.53 and fifth fastest overall) a fighting chance of chasing after the medallists on the final leg. In the end they were just a few seconds away from a podium position, with what was a superb all round team effort. The under 17 women placed fifth, with a stand out opening leg run from Eimear Griffin who handed to Katie Balme in second place with her 8.33 being the fourth best time overall. Balme went into the lead on the second stage with her 8.52, before Jemima Heyward Bhika completed the final stage in fifth in 9.42.

Herne Hill men placed what seems to be a perennial fourth, having filled this position every year since winning bronze medals in 2014. First leg saw Mike Cummings (14.08 and seventh fastest overall) hand over a close up third, followed by good runs from Simon Coombes (sixth in 14.47), Alan Barnes (sixth in 14.57) and Dave Mulvee (14.15) to bring the A team home in fourth to emulate the women’s final placing.

The under 13 boys team of Christo Chilton (second place on his leg and third overall with 7.08), Zak Crowther (third at the end of his stage in 7.31) and David Aisa Miller (8.05) placed fifth. This was a position also achieved by Harriers’ under 15 boys, as an unwell Jaden Kennedy was unable to work his usual magic on this occasion. This was nevertheless a fine performance by the team – Charlie Krammer (fourth on first leg ans sixth overall in 6.47), Kennedy (eighth in 7.29) and Jacob Harrison (up to fifth in 7.00), with a B team of Luke Stevens Cox (7.07), Jacob Alley (7.20) and Benjamin Harrison (7.10) placing a good eleventh on another day when Herne Hill demonstrated club strength across the age groups.

The club also had a couple of medal winners at an event for older athletes, the Surrey Masters Cross Country Championship in Richmond Park. Ben Paviour placed second to claim the M40 silver medal and Herne Hill’s Masters man for all championships Gary Ironmonger won the gold medal as first in the M55 category. Helen Hadjam placed sixth W40, Robin Sanderson was tenth M40 and James Ward fifteenth M40 at an event where team medals eluded the Herne Hill contingent this year.