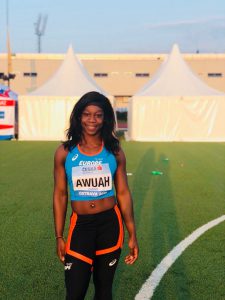 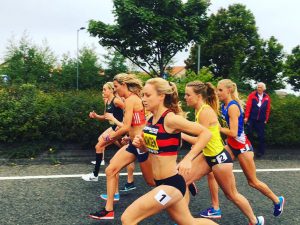 Kristal Awuah and Katie Snowden have flown the Herne Hill Harriers flag throughout the summer both at home and abroad and as both brought their track seasons to a close Awuah in particular has enjoyed a quite phenomenal breakthrough this year.

Awuah has represented not only her club, but her country Great Britain at the World Junior Championship in Finland where she won two bronze medals and culminated on Saturday racing for her continent as she was selected for the Europe team at the IAAF Continental Cup in Ostrava.

Awuah was part of an all British 4 x 100m sprint relay team which also featured European champion Dina Asher-Smith. This strong team placed second in the race as a fitting finale for 19 year old Awuah to round off a truly stellar season which has seen her rewrite the Herne Hill club record books for both under 20 and senior women at both sprints. Now ranking third among Great Britain senior 100m runners for the year, Awuah can now be considered as a world class athlete.

Domestically, eagle eyed TV viewers of athletics will again have spotted Katie Snowden wearing her red and black Herne Hill club colours as she placed seventh in an international field in the women’s elite one mile road race at the Great North City Games in Newcastle, also racing with a European champion as Laura Muir took the win.

Snowden too closed out what has for her been a long season that began with the Commonwealth Games on the Gold Coast back in April and although not seeing the breakthrough she would ideally have wanted, Snowden has now fully established herself among the very top British senior middle distance athletes in another of the nations stronger events in depth and will go into her winter training with high ambitions.